Home  »  From the Forge - News • Lifestyle  »  Your Village Blacksmith 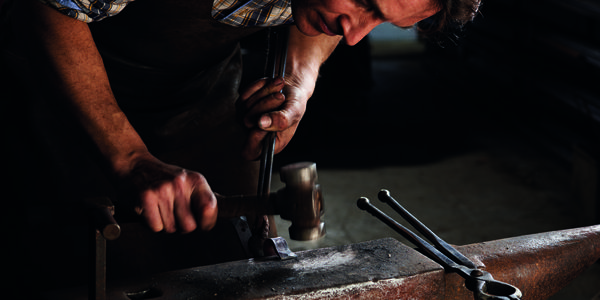 Made by the Forge is your village blacksmiths shop even if it is not in your village! We still use the same tools and the same skills as our ancestors did. ‘The blacksmith, master craftsman throughout the centuries, came into being with the discovery of iron as a workable metal some 2,500 to 3,000 years ago.’ Webber

Historically, Blacksmiths were central figures of the community ‘a man not only a blacksmith and farrier, but, at times, wheelwright, carpenter, tinker, veterinary surgeon, doctor, dentist, sportsman and many other things.’ Ronald Webber 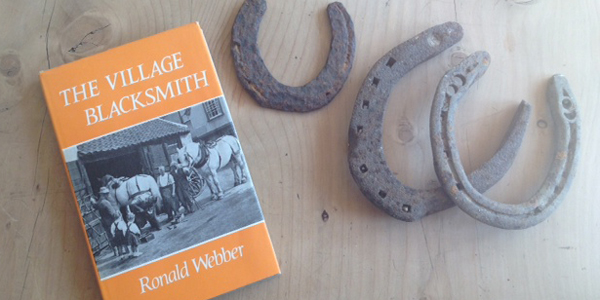 A blacksmith could make anything out of metal and mend anything too. The blacksmith worked iron and shod horses in his own ‘shop’ at the centre of the village. These were places that were once filled with the noise of horses and hammering and the smell of burning hoofs. It was a place to gossip and mostly now these blacksmiths shops have gone to other uses. We are proud to be keeping the craft alive here in Suffolk.

Richard’s life is powered by the fire and drama of the forge and by the beauties and dangers of horses. 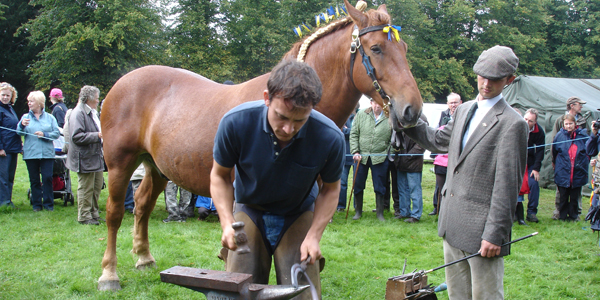 In the forge he still uses traditional skills but has adapted this craft for the modern day market as seen in our range of iron products for the home. By working with product designer Anthony Dickens we are moving with the times and producing useful objects, that serve a purpose, which are beautifully designed. 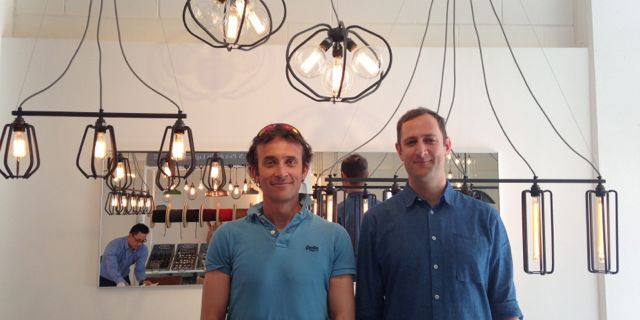 Richard and Anthony Dickens at Heal’s Queens showroom with our new collection of Farrier’s Cage chandeliers which are now available.

The poem attached was written by Henry Wadsworth Longfellow (1807-1882) and describes a local blacksmith and his daily life when blacksmiths were very much the focus of village life.

Under a spreading chestnut-tree
The village smithy stands;
The smith, a mighty man is he,
With large and sinewy hands;
And the muscles of his brawny arms
Are strong as iron bands.

His hair is crisp, and black, and long,
His face is like the tan;
His brow is wet with honest sweat,
He earns whate’er he can,
And looks the whole world in the face,
For he owes not any man.

Week in, week out, from morn till night,
You can hear his bellows blow;
You can hear him swing his heavy sledge,
With measured beat and slow,
Like a sexton ringing the village bell,
When the evening sun is low.

And children coming home from school
Look in at the open door;
They love to see the flaming forge,
And hear the bellows roar,
And catch the burning sparks that fly
Like chaff from a threshing-floor.

He goes on Sunday to the church,
And sits among his boys;
He hears the parson pray and preach,
He hears his daughter’s voice,
Singing in the village choir
And it makes his heart rejoice.

It sounds to him like her mother’s voice,
Singing in Paradise!
He needs must think of her once more,
How in the grave she lies;
And with his hard, rough hand he wipes
A tear out of his eyes.

Toiling,–rejoicing,–sorrowing,
Onward through life he goes;
Each morning sees some task begin,
Each evening sees it close
Something attempted, something done,
Has earned a night’s repose.

Thanks, thanks to thee, my worthy friend,
For the lesson thou hast taught!
Thus at the flaming forge of life
Our fortunes must be wrought;
Thus on its sounding anvil shaped 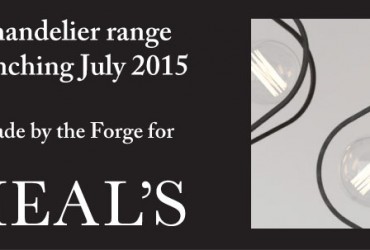 Next Article   Beeswax and how it is made